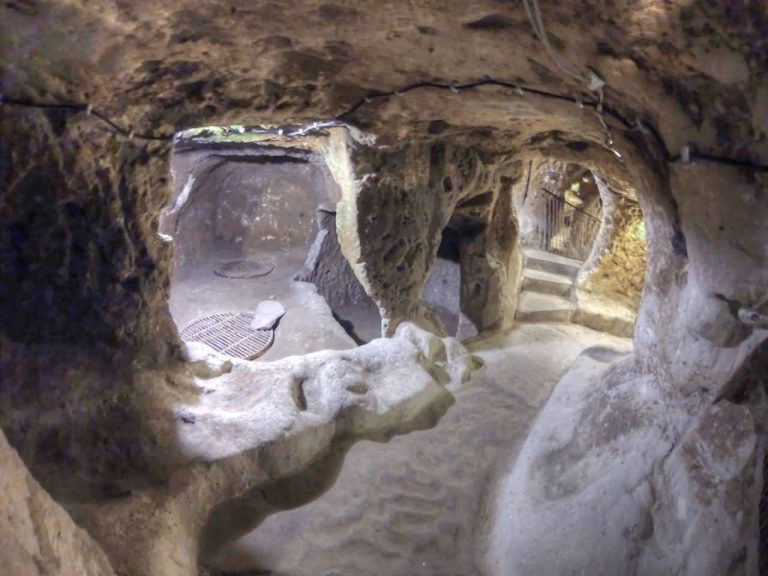 An underground city is a series of linked subterranean spaces that may provide a defensive refuge; a place for living, working or shopping; a transit system; mausolea; wine or storage cellars; cisterns or drainage channels; or several of these. Have a look below are the two underground cities of Turkey. 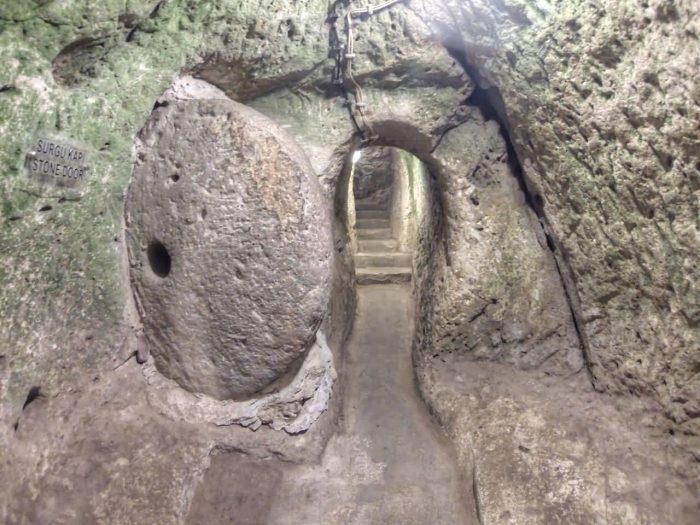 The underground city at Derinkuyu could be closed from the inside with large stone doors. Each floor could be closed off separately. Unique to the Derinkuyu complex and located on the 2nd floor is a spacious room with a barrel vaulted ceiling. It has been reported that this room was used as a religious school and the rooms to the left were studies. 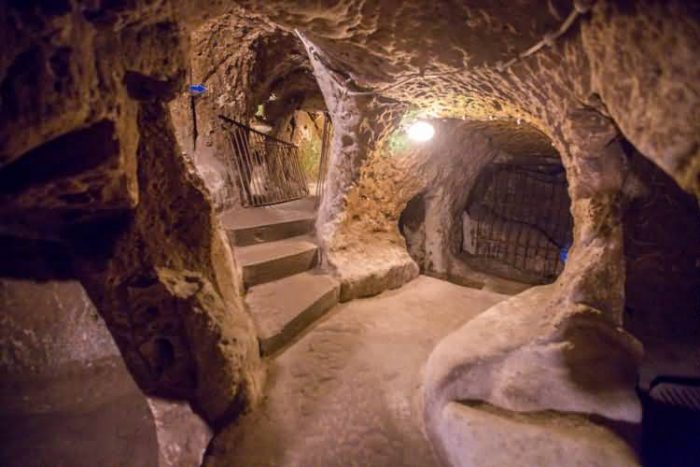 Between the 3rd and 4th levels is a vertical staircase. This passageway leads to a cruciform church on the lowest (5th) level. The large 55 m ventilation shaft appears to have been used as a well. The shaft also provided water to both the villagers above and if the outside world was not accessible, to those in hiding. Nevşehir Province has several other historical underground cities and Derinkuyu connects to Kaymakli via an 8 km tunnel. The cities at Kaymaklı and Derinkuyu are two of the best examples of habitable underground structures. 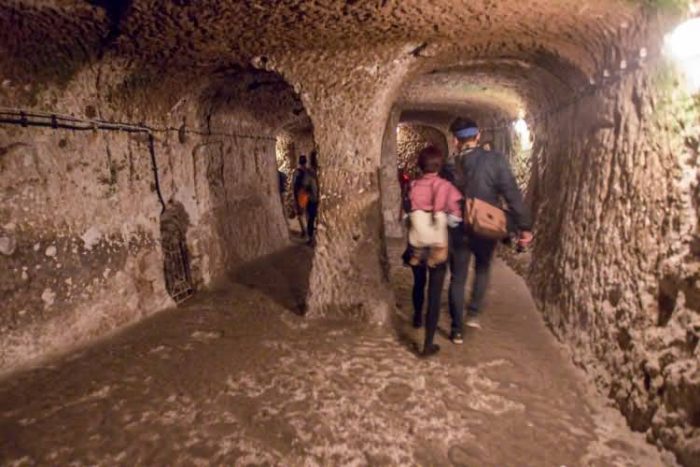 The Kaymaklı Underground City is contained within the citadel of Kaymakli in the Central Anatolia Region of Turkey. First opened to tourists in 1964, the village is about 19 km from Nevşehir, on the Nevşehir-Niğde road. 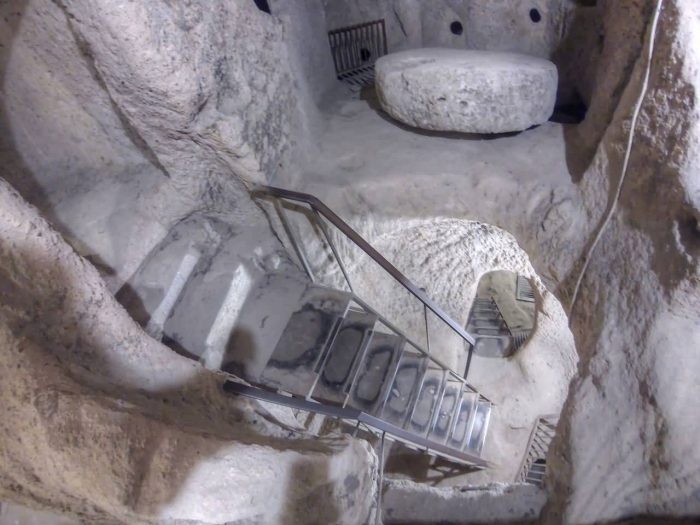 The houses in the village are constructed around the nearly one hundred tunnels of the underground city. The tunnels are still used today as storage areas, stables and cellars. The underground city at Kaymaklı differs from Derinkuyu in terms of its structure and layout. The tunnels are lower, narrower and more steeply inclined. The 4th floors are open to tourists, each space is organized around ventilation shafts. This makes the design of each room or open space dependent on the availability of ventilation. 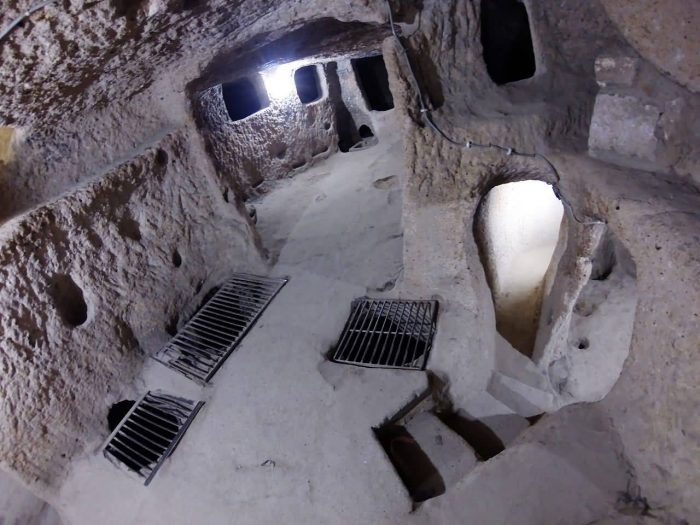 A stable is located on the 1st floor. To the left of the stable is a passage with a millstone door. The door leads into a church. To the right of the stables are rooms, possibly living spaces. Located on the 2nd floor is a church with a nave and two apses. Located in front of the apses is a baptismal font and on the sides along the walls are seating platforms. The 3rd floor contains the most important areas of the underground compound: storage places, wine or oil presses and kitchens. 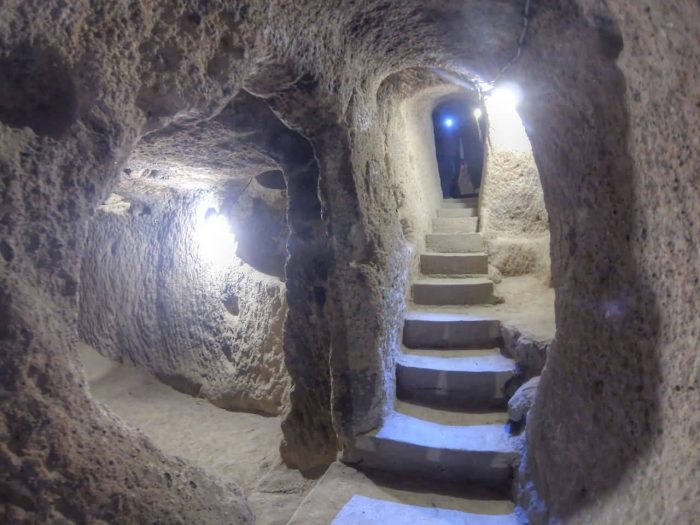 The high number of storage rooms and areas for earthenware jars on the 4th floor indicates some economic stability. Kaymakli is one of the largest underground settlements in the region. The large area reserved for storage in such a limited area appears to indicate the need to support a large population underground. Currently only a fraction of the complex is open to the public. 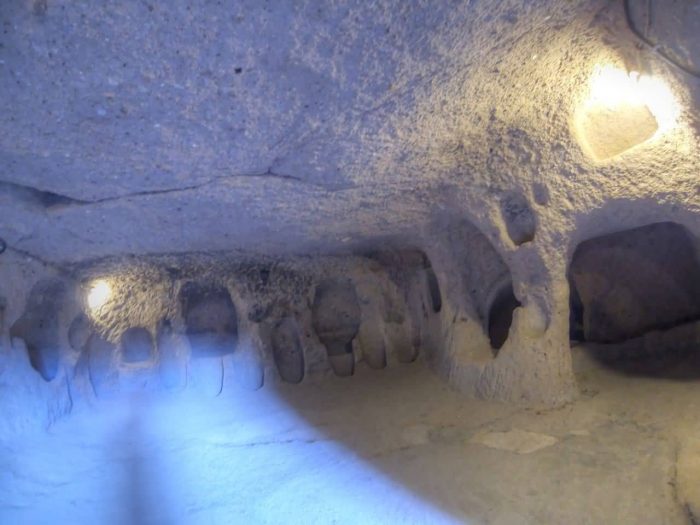